My first game at the new Yankee Stadium.... 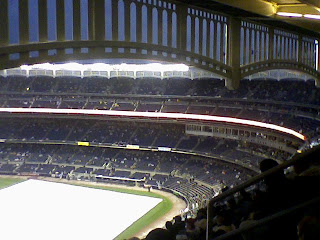 This one is called .... Rain Delay! My first game at the new stadium was a washout, or so it seemed! On May 4th (I know, its a little late), My father and I had tickets for the first Boston vs. New York game at the new Yankee Stadium. It's raining all day and it was raining just as hard at 6pm as it was at 9pm. After spending a fortune on a few dogs and 2 beers we decided that at 9pm we called it quits for the night. So when we left, at 8:58pm to be exact, there weren't any grounds crew out, announcements made, or any kind of indication that the game would start anytime soon. 10 minues later we're back in the car, we're soaked, I turn on the radio and there's Susan "Goodness Gracious" Waldman ...... "And the ground crew is out and it looks like there will be baseball tonight!" Unbelievable!

Better yet, almost 20 days later, I figure out how to post pictures from my trusty free Samsung verizon sent me that I can text directly to my blog. No, this isnt a cheap plug for Verizon, I'm just excited about learning new technology that's been out since forever! Go Yanks!