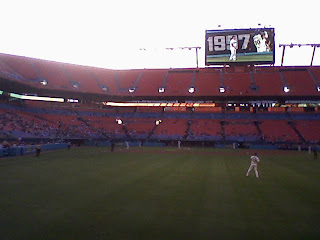 . . . . And the guy at the gate said there was going to be a great crowd tonight!

Here's a pic I took with my phone in the top of the first inning. I'll tell you this, I think I was literally able to count the fans in the stands. I don't think there was even 2000 people in the crowd total. Unbelieveable. I live in New York, so even when the Mets are in a funk like they are now, there's still a decent crowd. This was unbelievable.

What's great is that u can pay $8 and sit anywhere! My wife and I bought two $20 tickets off a ticket site the morning of the game! We originally bought two seats in the first row of section 129 which were first row seats just above the outfield wall. We were so close, the lengthy Jeremy Hermida was blocking our view of the plate most of the game. When I gave Jeremy the "pssst" and politely asked him to slide over a bit, he completely ignored me.

The rest of the experience wasn't actually too bad. When you go to Yankee Stadium on a daily basis, despite the excitement of actually having the priviledge to be in Yankee Stadium, as some of you know, its one big pain in the behind followed by rudenes, frustation, and expensive treats. Enter Landshark Stadium.....

I normally wouldn't write about a trip to a stadium but I thought this was so unique that I just couldn't resist. Everything you wish you could have or get during a major league baseball game is here. We paid $10 for parking! Awesome! We parked, seriously, 6 spots from the gate...and no one parked next to us! Awesome! We rolled right into the stadium and to a beer vendor for a Landshark with no line! Awesome! We then walked over to grab some snacks from the concession stand (Nachos Grande for me and a Hot pretzel for the wifey) that only cost $10 total! Awesome! We go to our seats and we are the only ones in our row, it was like having the entire stadium to ourselves! Awesome! We sit down and not even 15 seconds later my wife says "This place is empty. Are these teams any good?"

By the 4th inning we were up sitting behind home plate for the rest of the game. It was like watching the Bad News Bears for 9 innings. By the 5th, people were already leaving for the night. By the 9th, there had to be less than 1000 fans left in the seats. We stayed the entire game. At the end of the 9th, we got out of our seats, walked straight to the car and left. No traffic!!! I couldn't believe it.

I won't go over the edge here and say it was a great game, but we actually had a pretty good time overall. The convenience really plays a big part in the overall experience. The small crowd actually allowed us to focus in and really enjoy the game like it should be enjoyed. We didn't leave until after the game was over. So if you're looking for something cheap to do in the Fort Lauderdale/Miami area, go check out a Marlins game!