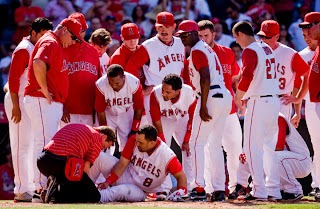 Time for another rousing edition of Like 'em, Love 'em, Leave 'em. I want to address First Base with this round because...well, I have noticed a certain anomalous situation I get myself into with mock drafts (last year's real draft too for that matter.) Since First Base is usually a deep position, I wait on my 1B. And wait. And wait. And wait.


Literally, about the 20th 1B off the board. I load up on other positions and wait for Brandon Moss or Justin Morneau (yes, I second The Fantasy Man's thoughts on Morneau as well.)

If I have a late first round pick, I'll take a Pujols or Votto or Fielder, and I'm not against taking an Adrian Gonzalez or Freddie Freeman later on. Sometimes though, I value depth at other positions so much that I wait for that gem.

That said, I'm interested to hear your thoughts, kind reader, and tell me if I take too rosy a view on these latter-level options. Keep in mind, these are with the mentality that I'm picking for a starting position rather than depth.

Let's start with the two guys I mentioned and one other guy: Brandon Moss, Justin Morneau, Lance Berkman

The early ADP has Berkman about 2-3 rounds behind the other two. Despite that, I think Berkman is the easy pick here. The reason being...he's DH'ing. In Texas. I mean...that is just beautiful. I could DH in Texas and hit .200, so imagine what a competent, though aging hitter could do. The bonus there, as I mentioned with the Catchers, as a DH, he has less risk of getting injured.

Then it gets interesting...Moss is in Oakland and he ain't Canseco or McGwire (controversies aside.) He isn't getting a lot of attention outside of “Power Sleeper” title, but he hit .291 in about half a season and still blasted 21 HR's. That said...if Morneau is healthy again, he's a safe bet for a .280 average and 20+ HR. I can't say a guy with lingering concussion issues is the “safer” pick, but I'm debating which guy could net me more in a trade if I try to upgrade at 1B. If a week into the season, these guys are both hitting .350 and have a couple homers (and let's say their teams are both looking sharp,) do I get more in return for Morneau, who has the track record of success, or Moss, who doesn't have the track record of concussions?

If I'm in this spot, I might draft Moss and take my chances (largely because of some of the people I play against, they like the new blood), but I'm putting the “Like” tag on Morneau. If a quietly consistent player is good enough in that spot, I may just roll with him.

Morales becomes more and more interesting as the season approaches. He was traded to Seattle (bad) where they are moving the fences in (good), and now he may be sandwiched between Mike Morse and Jesus Montero (pretty good). Not the worst place to be. Not the best either. Seattle will still likely be a pitcher's park, but the lineup should help him do better than we thought a few weeks ago.

Yet, I feel trepidation from many of you kind readers. Morales is a guy I'm putting on the fence, I'll live without him if I don't get him late, but I'll feel pretty good with him if I happen to draft him in the last 1/3rd of the draft. Then there's Hosmer, who didn't have a sophomore slump so much as a sophomore dump. This guy was very good for me when I got into this undesirable position a couple years ago, and I can't think that last year showed us who he is going to be as a pro. I'm a sucker for good batting averages, so that helps his argument. Tough to say where he'll be in the lineup though, so if I'm really looking for Runs over RBI's, I'm going to be tentative about taking him.

And then there's Ike Davis, a good sleeper pick for his power, but is he a guy you want to rely on if you get this low? I want a guy who could be a Top 10 guy at this position, and I just don't know that Davis has that in him. Injuries, batting average, RBIs, any of those could limit his value very easily (although the RBIs should be okay, not great, just okay.) Not to mention, I don't like their lineup as a whole.

So needless to say, if I don't have a 1B by this point, I hate myself, but I think I'm going to say I “Love” Hosmer, I “Like” Morales, and I'll “Leave” Davis. Hosmer is the only one I could make any argument for as a potential Top 10 1B. I'm going Morales over Davis because an okay batting average, with a little help from a good lineup, will find Runs and RBI's; I don't need to hope they come along. I like Seattle's lineup much more than the Mets'. I grant you, I'll need some faith either way regardless.

Next time, I'll hold a memorial service for the Fantasy position of Second Base.

By David Bobke
Posted by The Fantasy Man at 8:26 AM