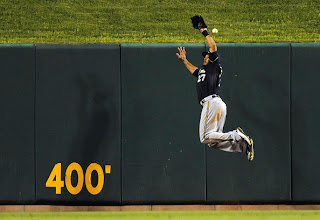 Fantasy baseball advice for the new year! Happy New Year Everyone! Here's a late Christmas present from The Fantasy Man to you.  Maybe its the gift that keeps on giving all the way through September, maybe its a regift that has you cursing me out in May. Either way, here are my 2013 fantasy baseball sleepers....

How I personally define the term "Sleeper":

The typical idea behind the "sleeper" is finding a player deep at the end of the draft that no one is thinking about. This is a player you draft which in turn will provide you with the same type of stats you would normally receive from a player drafted much higher in the draft.  This is where you accumulate "value".  The more value you accumulate in the draft, the better your chances are of finishing in the money.  The problem is, with readily and easily accessible information on the Internet, it seems everyone knows who he sleepers are.

My idea of a sleeper is a little less general but also a bit "out there" as well. I have different levels of sleepers which if researched correctly, will boost your chances of competing later in the season....for me at least.  A few concepts regarding "sleepers" in my draft strategy include:

Level 2 Sleeper: Drafting full-time forgotten players deep in draft as "sleepers" over your typical grab and stash rookie. I'm talking about the players the magazines/other sites won't risk mentioning as sleepers but will "potentially" provide excellent value as everyday players.

The main concept and really my personally strategy through out a draft is to choose players that I feel are going to help me every day. Remember, this is a game of predictions. No magazine or "expert" knows what a player will do for sure, its all guesswork, much of the time regurgitated from one source to another. So the faster you realize that, the better.  He who guesses best, wins. Stats, past history, current trends, all give us clues to the mysteries of every players' 2013 season.  Your own research (watching players, following stats, reading real news) also offers clues to the mystery. With that said, here are my 3 levels of sleepers in 2013.  These are the players I will start to gravitate to in drafts quite consistently....

Level 1 Sleepers:  The Poor Man's Jacoby Ellsbury
One of my go to strategies is to find players who do it all and possess a BA/Power/Speed combo.  Players who do all, will bat in the top of middle of the order, and get you RBI and Runs. So I'm looking to accumulate HR and or SB with BA in mind.  That's typical of all fantasy baseball managers but here's where I'm aiming in 2013....

Desmond Jennings, OF - I like to scour draft rankings looking for the next 2010 Jacoby Ellsbury.... approximately .290+/20HR/50SB/100R (expecting 30HR+ is outrageous) .... so anyone in that vicinity of any combination of those numbers is a "Poor Mans Jacoby Ellsbury" meaning I can potentially get Ellsbury-like numbers later in the draft.  So while the average league drafts Ellsbury in round 2-3, I might look at Jennings in 5-7.  He's 26, has amazing speed and possesses power.  The 10 HR he hit in limited AB in 2011 that got everyone worked up for a great 2012 season, just throw it out the window.  The CBS projection for 2013 is  .266/15HR/56RBI/37SB which you can compare to Ellsbury's projection above.  Nuff' said!  Jennings has .290+ BA potential, just look at his minor league numbers.  So here's a potential Jacoby Ellsbury 3-5 rounds later.  That's value.  This allows you to draft a power bat or a scarcer position earlier rather then choosing Ellsbury.

Carlos Gomez, OF - The great thing about Gomez is there's not a ton of believers out there yet. I just read a magazine projection that his power last season (19HR in 415AB) was "uncharacteristic".  Really?  This guy hasn't played a full season since 2008 when he was 23.  His poor performance over the years is well documented but doesn't anyone remember how highly touted he was while in the Mets' farm system?  In 2011, in limited time, Gomez hit 8 HR in 231 AB. Project that over a full season of 600AB and your in the 20-25 range.  CBS projects a stat line of .256/23HR/54RBI/35SB..... HELLO!  That's in 465 AB.... whats the projection for 600AB?!  Point is, this guy is 27, he's 6'4" with blazing speed so the size is obviously there, he's a great defender, he's certainly shown maturity over the last two years and my favorite point..... he's was extremely consistent once he became the starter in the second half of the season. Look up the his second half stats.  He's a free swinger, many times has no clue at the plate but he showed he hit righties and lefties evenly last season.  Don't let the over analyzing "experts" punk you here.  I'm a believer. I don't dive deep into the stats because my main thought here is that he's matured more then anything.  Skills and tools have always been there, now he has a full-time job to build on as he starts to enter his prime. This is the last year he'll be somewhat cheap. Look at the projection! Don't get punked!

You can now pass on Ellsbury, grab Jennings in the early middle rounds and grab Gomez just after Jennings.  There's probably 60% of your speed just in these two players both primed for breakouts if they stay healthy.  Call me crazy... or just call me, maybe.

Level 2 Sleepers:  The Forgotten
You can pretty much find these guys at the end of any draft but these are the type of players that turn fantasy managers into fantasy geniuses.  Get lucky with one or two of these players and your odds of winning increase dramatically.  In no particular order...

Carlos Quentin, OF - One full season yielded great results. Quentin hit 16 HR in 284AB last season and SD moving fences in slightly.
Brian Roberts, 2B - A healthy Roberts will yield you .280+/25+SB at minimum
Gordon Beckham, 2B - '11 and '12 were almost identical butt he hit 6 more HR, more BB, less K in '12
Stephen Drew, SS - I'm thinking new scenery, healthy, in prime and so much talent he's a nice flier
Chris Carter, 1B - Hit 16 HR in 216 AB last season but with 83 K, will probably platoon but power is legit, he's a right handed version of Ryan Howard minus a lot of batting average
Dexter Fowler, OF - Same numbers every year but step up in '12, turns 27 in March, I love the upside


Level 3 Sleepers:  The Super Sleeper
I like to look for players that no one else is thinking about, including the magazines and other fantasy sites.  I guarantee this is the only place your going to see Nolan Reimold on a sleeper list.  So that means either I'm the worlds worst Fantasy Baseball Advice guy or..... there really is something there to talk about.....

Fernando Martinez, OF - Once a big time Mets prospect, Martinez was never able to impress. Houston picked him up last season and he hit .300+ in AAA, then came up and hit 6HR in 116 AB with a .237BA but hit .262 from Mid August on. There's 15-20 HR potential here and he's only 24.
Dominic Brown, OF - No one is thinking of this guy, two or three failed break out attempts so far in majors but minor league numbers and short majors stints suggest potential 20/20.
Nolan Reimold, OF - You zig, I zag.... while everyone looking at Nate McLouth late, I like what Nolan Reimold did in his 67 AB last year before getting hurt.  Look at his minor leave numbers and what he did last year in that small sample. If healthy, he's still likely an everyday player especially if Nate McLouth cannot sustain.
Jerry Sands, OF - The Pittsburgh OF looks crowded as is but Sands has 25+ power if he gets playing time.  This is more a grab and stash type player with a decent chance to crack the lineup or get traded in spring training to a team in which he can start.
Evereth Cabrera, SS - This guy punked everyone in 2010, disappeared in 2011, and then came back last May to steal 44 bases and lead the NL. Bad news is you get no power and a low BA, good news is you get SB, Runs, and OBP. He's got an everyday job and still only 26.  Considering how weak SS is this year, I'm not sure he's going to be a super sleeper but he's received no hype and is why I decided to spot him here.
Ian Stewart, 3B - He's the exact type of player that I like to include on this list.  A perennial sleeper bust and he'll probably bust again this year too.  However, the one year I don't add him and you know what happens?  Exactly.  Stewart has 20+ HR potential for sure and can drive in runs but his BA potential is just horrible. I like Stewart as an end game flier for the power potential. He's 27 and on a one year deal and will have to beat out a few guys to be a starter so if he has a strong spring, we may be on to something here.....