Deep Outfield Part 1 of 3 ...Fantasy Baseball Where No Man Has Gone Before 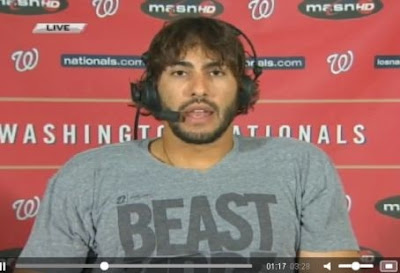 As I try to stick with the names that will come up later in your draft, I must forgo the popular names and discussions, such as the Braun vs. Trout. I'll skip over the Top 20-25 (depending on whose list you look at), and focus on the guys who could be your #3 or #4 OF.

Of course, my other job is to be entertaining, if possible. Plus, I try to help out newer players above all others. Therefore, I shall attempt to differentiate some Outfielders in the #25-40 range by comparing them to the Star Trek movies. The basic premise, one sentence about each Trek movie, either the plot or my general feelings about the film are fair game. I'm skipping the JJ Abrams one because I still haven't seen it. Then, I'll equate a player that bears some similarity to the movie.

Yes, I have a strange mind. Just roll with me.

Star Trek 1: A movie which by any other name would be viewed more favorably.
Player equivalent: Mike Morse
So here's the thing...I've determined that the first Trek movie is actually not bad, and if it didn't have the Trek name, people would basically be okay with it. I feel like Morse is in the same situation in Seattle. He's the same guy he was in Washington. RFK Stadium is thought of as a somewhat neutral park, as opposed to the Pitcher's park that he now has in Seattle. I talked about this in my column about 1B's with Kendrys Morales. Between Morales, Morse, and Jesus Montero. Morse should be able to hit better than .275 with 20+ HRs and a good number of RBIs, even in Seattle. As a fourth OF, he's the kind of guy that other people may not feel sure about, but I'm happy to take him and watch Mike Morse be Mike Morse. If I trust the OF's ahead of him to deliver some Runs and Stolen Bases, Morse should be an excellent compliment to them.

Star Trek 2: Awesome.
Player equivalent: Norichika Aoki
Okay, it maybe unfair to compare any non-Top 20 OF to the awesomeness of “Wrath of Khan,” but I'll do my best. Aoki seemed to surprise some people last year, and I'm not sure why. The depth of the Brewers' outfield may have had something to do with that, but this was a WBC player who hit anywhere from 1 to 4 in that lineup, and he could provide the Brewers with a leadoff hitter, the likes of which they haven't had in years. He had speed and just a touch of pop, but he...yes, had a really good Batting Average. I was going to run through some of his projected numbers, but frankly, I go by feel. If my #4 OF is hitting leadoff with Braun two spots behind him, I like his chances for Runs and a few Stolen Bases. I may be asking a bit much for him to be my #3 OF...but then again, I don't know that I am. If I'm drafting my Outfield late, I'd feel pretty good about my team if I wind up with Aoki and Morse occupying those third and fourth slots.

Star Trek 3: Downhill slide after greatness.
Player equivalent: Hunter Pence
So many ways I could go with this description. I could stick the fork in Carl Crawford or Nelson Cruz, but I'm going Pence instead to serve as a warning. I look at him as, it would seem, the Giants #5 hitter, and basically, he's Runs and RBIs. He should be in the peak of his career, but I as I look at his numbers, I don't see the consistency I want in a fantasy player. If he slipped and was my #5 OF, fine. I'll take my chances, but as a #3 or #4, I will pass. He could be fine, but there are so many other options out there. While ST3 wasn't as good as its predecessor, it did have some points in its favor. Christopher Lloyd as Kruge for example. And in that vein, I will give Pence credit, he'll beat Aoki in HR and RBI. If I need that, I have to consider Pence. However...there's still something about him that, to put it bluntly, terrifies me. Not unlike the Pon Farr scene in ST3. Just...awkward.

Written by David Bobke
Posted by The Fantasy Man at 6:15 AM