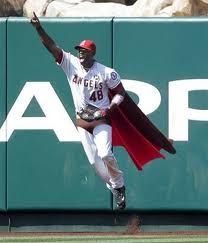 For those of you who missed Part 1...I shall attempt to differentiate some Outfielders in the #25-40 range by comparing them to the Star Trek movies. The basic premise, one sentence about each Trek movie (not the JJ Abrams one because I still haven't seen it) followed by what player I equate that film to.

Star Trek 4: The crew goes back in time to save Earth.
Player equivalent: Carl Crawford
Note: Before I started writing this column on Outfielders, I thought about doing the Star Trek idea with pitchers, in which case this movie's summary would've been “Save the whales” and the player would've been Bartolo Colon. I know, easy joke.
Crawford's case is pretty well known already. If you've been trapped under Bartolo Colon for the last couple seasons, all you need to know is he's been hurt. A lot. This may be the year for him to make a grand return though, which is why his name is still relevant to a silly writer like me. There's really only two reasons to draft him in my mind: A) you still believe and you're banking on him for 25+ steals or B) you are desperate and pick him purely for his upside, hoping he will bail you out. I did this in a mock recently, I waited on Outfielders and wound up with him as my third OF. My first? Carlos Beltran. The rest of my team looked fine, but holy Hannah Montana did my Outfield look like crap. If Beltran and Crawford pan out, then I'd at least be competitive, and at that point, I think it's worth a shot.
If Crawford is going to be successful this season, he'll need to go back in time and tap into his Tampa Bay days. If so, you'll probably hear a lot of preachy owners who pull out the “This is why you draft guys who've been successful already” message. Will it be as annoying as the environmental message of Star Trek 4? Maybe. Maybe not.

Star Trek 5: The search for the omnipotent being ends up turning up a false god.
Player equivalent: Wil Myers
This is where people will think I hate Wil Myers. I don't. Truly, I like the guy. I want to make sure you newer players don't invest too much in him. I'm really concerned if he gets off to a hot start in Spring Training. Guys have a hot Spring, their draft status goes up, owners want to count on them to stay hot all season. It's not going to happen. Perhaps he can be a decent #5 OF later in the year, but please don't expect him to save your team. Right now, he is a lottery ticket. He's a good lottery ticket, but he's not a lock to bail you out of a bad draft. A guy like Crawford will cost you more, but he's been there. He's already had the success and we know what we need to look for with him. I'm already starting to preach...I warned you about that, didn't I?

Star Trek 6: Strange and unique circumstances bring a new union.
Player equivalent: Torii Hunter
Yeah, this was the closest comparison I could come up with, but the Angels signing Josh Hamilton after claiming they were in a salary crunch seemed like a good enough comparison to me. I presumed they told Hunter that with the presumption that this money they set aside for Hamilton was already spent, so technically they weren't lying, just withholding part of the truth. But I digress...
I wasn't big on Hunter until I was reminded that he hit second in the Angels' lineup and put up very good numbers between Trout and Pujols (okay, “heard” is more accurate than “reminded”, either I didn't pay enough attention to the Angels last season or my memory is swiss cheese...which is entirely possible.) Austin Jackson ain't Mike Trout, but if Hunter can be good enough...just good enough offensively, hitting behind Cabrera and Fielder...he could be a quietly great pick for you in the draft. He is coming off his worst year in terms of taking walks, and that's a little bothersome, but as a #5 OF, maybe as a #4. I'd be pretty happy with him. His defense will keep him in the lineup regardless and he'll get a handful of RBI's.
If you're still not buying him, consider this...you can draft him as a #5 OF, get some production early in the season to cover your butt until you find someone better. By that point, if he's so decent, you can throw him into a deal later on claiming “he's not bad, I just don't have room for him,” or “money is tight,” if you really want to have fun with it. Hunter and Tigers...not quite Klingons and humans, but that's the best you'll get out of me on that analysis.

Star Trek 7: New and old come together and are ultimately pretty lame, but I like it anyway.
Player equivalent: Emilio Bonifacio
If you're familiar with “Star Trek: Generations”, you know it's not a very good movie. Even I admit that, and I'll watch it anytime it's on cable. I think it's Donald Sutherland that keeps drawing me in...then again, I have no interest in seeing “Tank Girl.” Whatever. Anyway, if you look at any of the quote major unquote fantasy sites, they won't have Bonifacio any higher than a 6th outfielder. Now here's what I don't get about these rankings: the Blue Jays' lineup will likely start off with Reyes, Cabrera, Bautista, Encarnacion with Lind, Rasmus, Lawrie, and Arencibia filling out the lineup with Bonifacio. I don't care where in the lineup he is, he will score runs. If he's 9th, awesome, he just has to get on base. If he's 6 or 7, he'll have guys who can do a decent job of knocking him in coming up behind him. If he's moved up to 2, so much the better.
Here's the best part though...he'll qualify at 2B in no time! In such a lousy crop of Second Basemen, I absolutely love that Bonifacio will have eligibility there. Look at the projected numbers all you want, I see great things for him this year. If I have no need for him at 2B, even I might not bother drafting him, but he'll get great numbers. He's not a popular pick right now and his stock may not rise much, but I'm still going to be tuned in when his name pops up as a “Best Available.”

Written by David Bobke
Posted by The Fantasy Man at 6:00 AM